Ron McLean, of Chesapeake, Virginia, has spent most of his adult life performing service work to benefit the lives of people less fortunate than others. In the late 1960s, he joined the American Peace Corps and also worked for the Cooperative for American Relief Everywhere. It was during this time, he began to build a foundation that would direct him on his lifelong charitable path of volunteerism.

The Peace Corps led Ron to live in India with the people in the actual projects he was there to help. He assisted the communities in using farm animals and vegetable gardening as a way of training primary school teachers to be “change agents” in the villages where they would ultimately work. “I grew up on a farm and was familiar with what development was about and the importance of animals and the importance of depending upon the Earth for survival,” he says.

“We did a lot education and empowering people. We lived among the people with whom we worked. You get an understanding of what development is when you are living among them. You get a whole different perspective of what their needs are, what the strengths of the communities are and how important it is to become more global in our understanding of people’s needs,” he explains.

Coupled with his giving spirit, Ron is also a retired minister and clergy in the United Church of Christ (UCC). It was 25 years ago, while Ron was serving on the UCC Board for Global Ministries, that he first heard of Heifer International, as they were a charity that the church worked with directly. As a result, he was asked to serve on the Heifer International Board of Directors in 1991.

“Ever since I learned that Heifer was the quintessential model for holistic and sustainable development, I wanted to be a part of it. Once I learned about the difference we were making in people’s lives around the world especially in India, a place where I lived and worked as a Peace Corps volunteer, and the work we were doing in Africa and other parts of the developing world, I said, ‘that’s the organization I want to be involved with. And I’ve been a part of Heifer ever since,’” he says.

At that time, Ron was especially impressed that Heifer used local resources from the communities in which they work to try and educate them accordingly. Whereas, the Peace Corps were dependent on American resources, Heifer was operating at a local capacity.

Ron has visited many of these local projects as a result of his Heifer service. He has participated in several Heifer study tours to Poland, South Africa, Tanzania, Kenya, Navaho Nation and other reservations in North America, to name a few. He says, “I was able to witness first-hand the depth of appreciation for Heifer and for the people of the United States who were charitable minded. I was able to see on the ground what we were doing and the impact we were making and the difference we were making in people’s lives.”

Ron explains, “As Americans we are blessed with so many things - food, clothing, shelter - our survival needs are taken for granted. Because of the freedoms we have, we can isolate ourselves from those who suffer socio-economically and those who strive to beat out an existence on a day-to-day basis. When we venture overseas and into third world countries, we discover how poorly the wealth of the world is distributed. There are people who survive and often thrive on far less than we could ever imagine. While I can say that and words may have an impact, one only gets an appreciation for what that means when you actually visit those settings and you see how people can take just one item, an egg, and allow that to be their only source of protein for an entire week for an entire family; and they manage to survive. Or they have just one gallon of water that they have to use to prepare their food and to clean and wash their clothes and all the things that have to be done in a given day. And then, that water has to be transported for miles without a vehicle, but instead, by walking and carrying it on their backs.”

He continues, “When we first see that, it can be a shock. But once we realize that these people have the same interests and needs as we do – they love and care for their children and they want to have a better way of life - once we see that and we experience it, we become more appreciative of how much we’ve been blessed and become inspired to do even more to address the inequities, the disparity and the lack of means and resources that so many people have that we take for granted in this country. It is the best education one can have. Thoreau says, ‘A traveler will never become a bigot.’ Once you venture outside of your comfort zone and see how a majority of the people in the world live, it can’t help but have an impact on your mindset and your appreciation for how much you have and that automatically leads you to want to share to make sure that others have the same blessings that you have. In fact, I think the way we say thank you to the blessings that we have is to share them with others. And as a result of sharing and giving, we are even more empowered and enriched and blessed ourselves,” Ron explains.

In 2008, Ron was elected as the Chairman of the Board of Heifer Foundation. Since the Foundation oversees and grows the endowment that supports Heifer International, he was able to work for an organization that practiced financial sustainability to the cause close to his heart.

“It’s important for us to not only give benevolently, but to also give in the area of sustainable development. That is, to help people help themselves and to move from a position of dependency on others,” he says.

As a result, Ron became a donor to Heifer Foundation, not only of his service time, but also through planned giving instruments of a bequest and endowment giving. Through his estate, he will create an endowment that will support South Africa, a country that he has a particular interest in because he helped Heifer initialize projects in that area.

Ron adds, “Part of my responsibility as an adult is to pass on my values and valuables to the next generation in a way that they are better off than I was. In order to do these things, you have to plan ahead. I’ve done that by creating an estate that will enable me to care for my children and grandchildren. It enables me to address capital gains tax from properties that I have. And it will end up in the hands of Heifer International, which is an important thing to me.

“I come from a family of philanthropists who enjoyed giving to worthwhile causes. It’s good that we have a Foundation that philanthropists can use to make a difference in the world - to make the world a better place. The Foundation gives me a chance to give in a way that I wouldn’t be able to give just by giving by annual gifts, but lifetime gifts, gifts of my assets to the organization so that it may exist in perpetuity. Gifts that keep on giving is sustainable giving,” he explains. 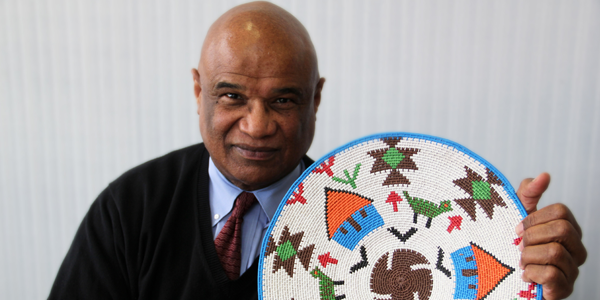