“My first introduction to Heifer was at a sheep and wool festival in New York State,” Alana Clegg recalls. Heifer International had an informational booth set up at the event and that’s where she and her long-time friend, Sue Bertrand, first learned about Heifer. It was during this visit at the booth that Sue asked the Heifer representative if it would be possible for her to get sheep for her farm. As a result, she was a recipient of the gift of sheep from Heifer.

Eventually, Sue became a livestock specialist for New York South Central Resource Conservation and Development Department. In 1994, this new-found passion for livestock and sustainability led to her going to work for Heifer International when Sue was offered a job in Mississippi.

It was during these four years in Mississippi that Alana travelled with Sue to see Heifer projects throughout Mississippi, Louisiana and Texas. Sue was also able to travel to Russia to visit Heifer projects and view potential project sites. This is where Alana witnessed the mission of Heifer and how they assisted impoverished communities in the world to become self-sustaining through the gift of livestock, education and training.

In 1998, Sue joined Heifer International in Little Rock and worked as the Vice President for Global Services, overseeing major initiatives such as gender equity, agroecology, and HIV/AIDS that cut across geographic boundaries. During this time, Alana also went to work Heifer International at their headquarters and served as a liaison between the community relations’ office and regional development offices.

At a Heifer service awards ceremony, they presented Sue with a $1,000 bonus for her ten years of service to Heifer. When she accepted it, she surprised everyone with the news of her wanting to start an endowment with Heifer Foundation with that $1,000. Alana was in the audience and stood up to say she would match her $1,000 gift to start “Grandma’s Endowment” that would benefit at-risk-youth.

“She called it Grandma’s Endowment because her grandparents raised her and Sue had realized more and more that many children were being raised by their grandparents. She just felt like she wanted to do something for any child at-risk,” Alana explains.

Eventually, Sue and Alana also set up a charitable remainder unitrust with Heifer Foundation. Together, they owned a farm in New York and they donated the property to the Foundation. As a result, they started receiving quarterly payments from the trust and took a sizeable deduction on their income tax.

In 2008, they retired from Heifer and moved to a retirement community in Hot Springs Village, Arkansas. However, in December 2009, Sue unexpectedly passed away. She was such a revered member of the Heifer family that her funeral was full with Heifer staff, volunteers and supporters. Jan West Schrock, the daughter of Heifer Founder Dan West, even officiated at the service.

As a result of Sue’s passing, her share of the trust was handed over to Alana as the sole beneficiary. Alana has also left Heifer in her will as a 50% beneficiary of her estate.

Alana adds, “I just feel really good about being a Heifer donor. I know that money is not going to waste. It’s being directed the way it should be. And that’s why I donate to Heifer.” 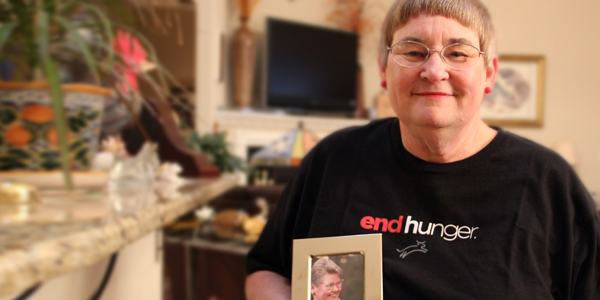