SYLVIA AND LEONARD KRATZKE . "I Want a Llama for Christmas" 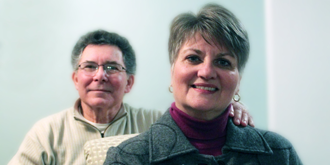 In a humble house tucked into a blanket of snow in Amherst, New York, Sylvia and Leonard Kratzke conduct afternoon tea, complete with a teapot and cosy, at their dining room table. Lenny ceremoniously pours the tea into milk-laden china cups while Sylvia sifts through scrapbooks stuffed with photos, drawings and poems by her daughter, Heather.

She delicately pulls out a sheet of paper filled with typed words and pen drawings of trees and a sun with a poem titled, "Sunrise" that Heather wrote while working as a porter at the Grand Canyon Lodge. Sylvia reads passages from the page as if it were a sacred text:

"An arc of gold peeks over the rim.
I hold my breath and I'm careful not to blink in this pregnant instant.
The whole glowing fireball of the sun shoots above the horizon.
My vision is covered with black spots as I cheer and clap my hands.
I feel as if nature was putting on a performance just for me,
like I am the only one in the world there to see the miracle of the dawn.
I can believe truly in the new day, in God, when I watch the sunrise."

During the summer that Heather penned this poem, she also had her first meeting with the Hotshots and Smokejumpers - her first wildland firefighters. Sylvia says, "It was an epiphinal season for her where she integrated her hopes and dreams and her education into her future. She saw how her desire to live and work outside in God's creation as a wildland firefighter - learning and implementing sustainable forest management - could be her pathway to her future."

Eventually, Heather would return to the Grand Canyon as part of the Grand Canyon Flight Crew while training with the Wildland Firefighter Advanced Apprenticeship Training Academy. "Her job was on an engine crew and she drove fire engines. Her title was Assistant Fire Engine Operator. And she was proud of that," Sylvia explains.

"She came home and said, 'I want a llama for Christmas!' I looked at her like she had three heads," Sylvia recalls. "'This (Heifer International) is a great organization and I want a llama for Christmas,'" Heather insisted, as she gave Sylvia a Heifer gift catalog. So that year and for years afterwards, the kids received a share of an animal for the holidays. "Heather got a share of a llama and her brother got a share of a sheep."

"Everybody's heard the phrase about someone who marches to the beat of a different drummer," Lenny, her stepfather, says "Well, Heather heard her own brass band." She had 10 tattoos that she received in exotic places during her travels, and when she studied in Spain and Costa Rica.

In 2002, Heather was killed in the line of duty in an fire engine rollover while fighting a wild fire in Northern California. She was only 29 years old and had lived a life that takes most people several decades to experience. Lenny once told her that she was smart enough to be anything in life she wanted to be. "But why a firefighter?" he asked. Heather responded that she "wanted to leave the world a better place for having been here."

When planning her funeral, Sylvia had to decide what to do with memorial gifts. As a result, she contacted Heifer Foundation and set up a memorial endowment - the Heather J. DePaolo-Johnny Memorial Endowment. Because of Heather's education in women's studies, she designated the endowment to benefit the Heifer gender equity programs. Through her studies, Sylvia explains, Heather realized that "all the women in the world are connected, and we are all connected, and life is all connected. She really felt strongly about that."

"We have planned giving after our death," Lenny says. "We have a steady stream of funds through the Buffalo Community Foundation that continue to flow into Heather's endowment, and that we hope will continue to grow throughout the years.

"The goals of Heifer mirror the goals in my life," he continues. "We have a planet that needs drinkable water, food that can be replenished, and we need to take care of the planet at the same time. These are the goals that Heifer stands behind and the gender equity projects speak to Heather. It fits like a glove."

"One of the things I like about Heifer is the concept of why should I give a man a fish when I can teach him how to fish," Lenny explains "And he's going to share that knowledge with his village. Heifer works with the local NGOs (Non-Governmental Organization) to discover what the needs are, then how to best fill those needs, then how to select those people that will work within the program.

"You're going to get these things and learn how to use the animals, we're going to teach you how, then you're going to share the gift and we're going to raise the whole level of the community. Boy, does that make sense to me," he says. "Let's recognize that it's the women in most of the Third World who are doing all the work. Let's bring their level of education up so they cannot only raise themselves up, but also their children and their villages - gender equity. Heather would have loved that."

Sylvia adds, "It's appalling to me as a human being that in the year 2011, there are people on this planet who don't have access to good, clean water on a daily basis. It's appalling to me that people don't have food to eat every day. And in some small way, if we can help, I intend to do it. Heather was my catalyst."

"I know our involvement with Heifer allows us to carry on Heather's legacy," Lenny says, "because the goals of Heifer to end hunger and poverty mirror Heather's ultimate feelings and goals. Our work for Heifer is so her impact will not be forgotten. This is what we're trying to do, in the broadest sense, in her name - serve the Earth and the people of the Earth. And Heifer, as an organization, serves those needs. It's a fit."